APFA remains deeply concerned that our members are facing furloughs while American continues to offshore flying to the Latin America (LAM) operation with Flight Attendants based in EZE, SCL, LIM, and BOG. Since taking office, I have repeatedly made clear directly to top AA Management that it is unacceptable to furlough one-third of APFA members, and close two of our bases in the United States, while leaving the Latin American operation mostly untouched. There must be a shared sacrifice within the LAM operation, and we will continue to press the Company to do the right thing for our members.

As our letter to Doug Parker makes clear, in the short term, the Company needs to reduce the flying in the Latin American operation proportionate to the cuts we are facing.

APFA will continue to pursue all available means to protect Flight Attendant jobs. We urge every APFA member, regardless of your crew base, to join us in letting the Company know your feelings on this very critical matter, using the link below this paragraph. The LAM operation disproportionately affects the MIA base today, but all Flight Attendants system-wide should be concerned about the effects of offshoring our work.

As we face furloughs in a United States labor market already decimated by COVID-19, it is more important than ever that every job in the United States that can be preserved must be preserved. Implementing furloughs equitably would save hundreds of jobs of US-based Flight Attendants and is the only fair way to approach the difficulties we face.

This is also the opportunity to engage in a broader discussion of the role of Latin American bases. APFA has long objected to the continued offshoring of American Airlines jobs. Now is the time to end this practice, which negatively impacts only one group of employees: APFA represented Flight Attendants. The Pilots at American are not subjected to having their flying sent offshore to cheaper labor.

I urge you to address this issue and help save Flight Attendants from unnecessary furloughs.

1. Where and when did the Latin American flying originate?
In December of 1989, American Airlines announced the acquisition of Eastern Airlines’ Central and South American routes and other assets for $471 million. With the acquisition, American gained access to 20 cities in 15 Latin American countries. In addition to these flights, American also agreed to purchase the Miami – London/Heathrow route from Continental Airlines, as well as certain Eastern Airlines Canadian routes. The deal also included landing slots at Chicago- O’Hare, San Juan, Puerto Rico, New York, NY and Washington, D.C.

2. When was APFA notified that Eastern’s Latin American Flight Attendant bases would be part of the deal?
On March 8, 1990, American notified APFA of their intention to utilize foreign-based crews, or non-resident aliens for acquired flying within Latin and South America, to a U.S. gateway city and beyond to other foreign points. American informed APFA that they intended to fully utilize all foreign-based Flight Attendants employed by Eastern Airlines at the time of the acquisition.

3. At the time, what was APFA’s response to the announcement of Latin American crew bases?
On March 16, 1990, APFA filed a Presidential Grievance. American responded to the grievance in April, indicating that APFA does not have an exclusive right to the performance of American Airlines flying. APFA disagreed with American’s position and filed an objection with the Department of Transportation (DOT) on April 12, 1990, to withhold final DOT approval of the Latin American transaction.

At the time, APFA National President Cheryl Leon stated, “American’s action is part of the Company’s general drive to force out more highly paid veteran flight crew members and fill their jobs with lower-paid new employees, or in this case, foreign nationals working at substandard wages.” 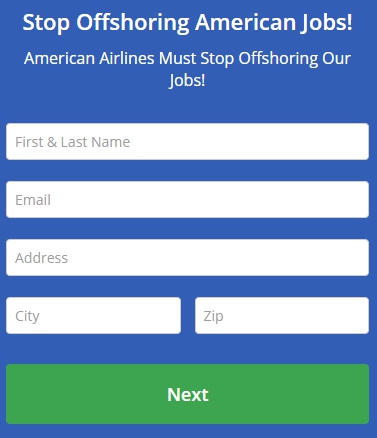