First, our apologies for not getting the PHX Base Brief out until today. As you all know, it has been a scheduling nightmare since July 28, in which you all have been living daily. Secorra and I cannot begin to tell you how proud we are of the PHX Base Flight Attendants and your ability to maneuver through the last 2.5 weeks. Between mid-sequence reschedules, cancellations upon cancellations, no hotels, unnecessarily long hold times for tracking, scheduling, and the hotel/transportation desk, it is understandable that anyone would have been at their wit’s end. And we have not even talked about Biz Hero and trying to book your rooms; some of you were successful and others not. However, you showed up and continued to take our passengers from point A to point B safely. For that, your APFA PHX Leadership applauds your continued professionalism. The Company has asked APFA to suggest changes that might help going forward, and each Base President sent a list for the Company to consider. We will not sit by and allow these unnecessary meltdowns to continue. Especially not at the expense of our membership!

On August 3rd, we had the monthly staffing call with the Company. In attendance for PHX were members of the APFA PHX Scheduling Committee:

Each month, we discuss the available headcount and number/percentage of Reserves deemed necessary.

For September, the preliminary numbers for the allocations call for PHX were:

Although 166 Reserves for September is a 5% reduction of Reserve numbers from July, it is still 3-4% higher than the other bases except for CLT and SFO.

PHX was given the opportunity to speak after five other bases. We asked for a reduction in the Reserve numbers. Once again, the Company reiterated that historical data was used to determine the percentage of Reserves and our high rate of sick calls. We argued using “historical data” due to the slashing of our base numbers from 2019 to 2021. We continue to challenge the Company’s data as it is clearly skewed and cannot possibly give a clear picture of what is required in this base at this time. We cannot stress enough to continue to reinforce our firm belief that the Company erred when they displaced 468 PHX Base FAs. Our goal is to ensure that all of our displaced Flight Attendants that want to return to PHX will be given the opportunity sooner rather than later.

Usually, the Allocations Call to discuss the sequence construction, type of trips (i.e., number of 1-, 2-, 3-, and 4-day sequences, ODANs, red eyes, etc.), any contractual violations, the length of the duty day, and overnights, follows the staffing call. However, after your PHX Base Leadership verified last month that the Company uses a single solution to build the sequences systemwide. I want to thank Scott Barnes for sending me that question. It only solidified the belief that each base’s suggestions to the Company asking for changes were useless in a single solution system. With that knowledge, APFA Leadership determined that the sometimes 3 to 4 hours spent on that call would not produce changes, wasting time and resources. The good news is that three days later, the Company reached out to APFA and asked for suggestions from each base to improve the sequences. Your PHX scheduling team met on Sunday, August 8, and put together a list of improvements we felt would meet the needs of the PHX-based FAs. Included in that list was:

We will see an increase in 1- and 2-day sequences for September with a decrease in 3- and 4-day sequences. ODANs were significantly reduced. The pull-down in flying is always expected in September. We lost 3724 hours of flying, with every base in the system losing close to 7-10% of their previous months flying. The Spanish speaker flying was reduced 40% upon repeated request to a little under 650 hours for September. With this reduction, the Company should not deem it necessary to continue the practice of pulling Spanish speakers from their Reserve rotation to Lineholder.

As for the quality of the sequences, we know that there is no continuity, except for Hawaii, and most of the multiple-day sequences only operate once in our base. The PHX-CUN turn days will operate every day, while CLT, ATL, and PHL turns will only operate 4 to 6 days in the month. We do have CVG turns operating 20 days in September, while MKE and CMH turns are reduced to 2-3 days in the month. 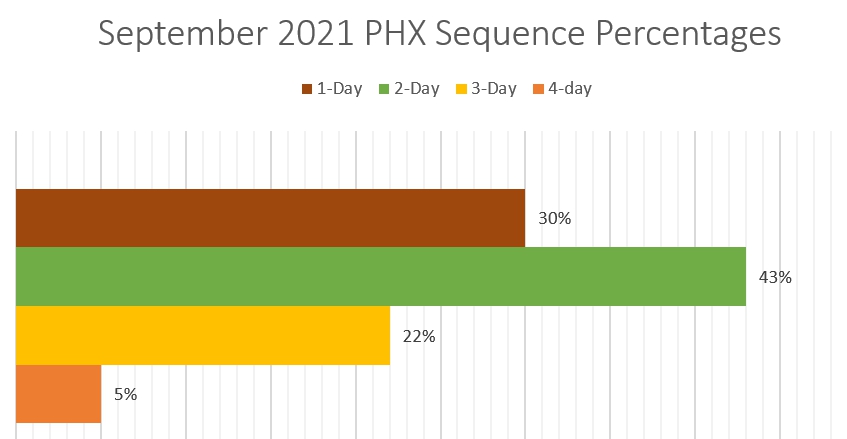 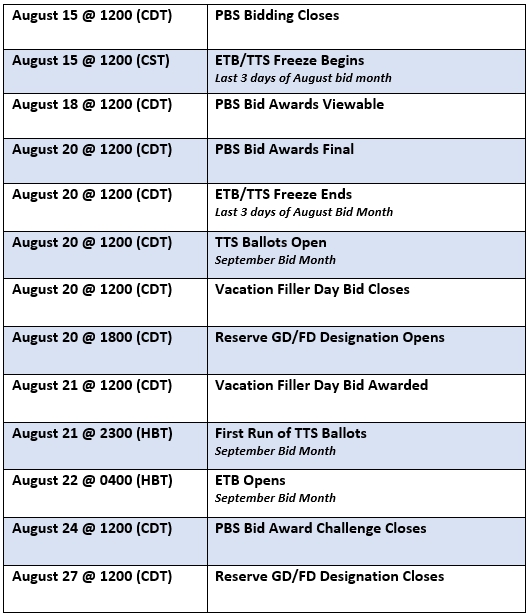 We are still receiving quite a few reports from Flight Attendants that they have late reports on their lines that are in error. We know that we have put this in the last three base briefs, however we are still seeing these late reports that should not be on FAs lines.

Please remember, whenever you are on Reserve, check your dashboard, H10M and your HI1 for any Late Report (LR) designation. When you are assigned a sequence with less than 2 hours to schedule report, but within 2 hours of departure, the computer system will automatically assign a LR to your line if you check in after the scheduled report time of the sequence.

We know that Crew Scheduling should be sending a communication to your FSM and have them remove the LR. However, as we know, errors can happen, especially when they are dealing with irregular operations. If you notice you have a LR and you reported to your sequence within the 2-hour report window, email your FSM and ask them to remove the late report.

Remember, this is your line, and you are responsible for ensuring that your pay, hours and any irregularities are addressed in a timely manner. Please continue to check your HI10M for any anomalies and discuss any irregularities with your FSM. The time to resolve these issues is not when you are given a disciplinary action.

Did you know that should you return to base between 2300 and 0600 due to late operation (delays) of your sequence, you are entitled to actual transportation charges “substantiated by receipts”?  Should you feel you are unsafe to drive home, or you do not want to wake your princess parking driver, you can take an Uber, Lyft or a shuttle. It is in the JCBA in Section 6.C.4.

What is considered positive contact? If you look at Section 10.V.5. the list includes Crew Scheduling(Tracking), a Company designee (member of Management), an FSM or the Captain. It is not a voicemail on your cell phone, a Crew Coordinator or Gate Agent. A Gate Agent can tell you that Crew Scheduling wants you to call; but again it is not positive contact.

Section 10.J.4. states that once a Flight Attendant crew has originated their sequence, the Company may reschedule such crew to maintain schedule or substitute another crew on a part of the sequence to maintain scheduled operations in accordance with published timetables. This is a mid-sequence reschedule and is legal. However, Section 10.J.7. states that at the time of the reschedule, the Company shall make every effort to schedule such FA crew to arrive back in their crew base no later than the time she/he was originally scheduled to return. In NO EVENT will the FA(s) be rescheduled beyond her/his originally scheduled return unless the Company has unsuccessfully made every effort to provide Reserve coverage to continue the sequence from that point without causing a delay or cancellation.  What does this mean?  If there are Reserves available, whether RAP or Standby, and the Company has sufficient time to put the reserve on that sequence without further delaying the sequence, then you should not be rescheduled from your original sequence.

On Thursday, August 5th an agreement was reached between Labor and APFA that Lineholders would NOT be rescheduled at the end of their sequence. Upon returning to base, the Lineholder is finished and cannot be “tagged” or given an illegal double up. As a reminder, if you are a Reserve once you are past your release time (block in plus 15 minute domestic debrief, or 30 minute NIPD/IPD debrief) you cannot be rescheduled. Rescheduling Issues Part VII: Forced Double-Ups

Per Section 8.G.1. of the JCBA, “A Flight attendant will not be required to work during a vacation.” And Section 8.J.4 “once awarded, vacation shall not be cancelled by the Company”.  These two sections of the Contract are important to note, as in the last two weeks we have successfully kept three (3) Flight Attendants from being scheduled into their vacation due to flying added to the end of their sequence.

If you are on Reserve and get back from an assigned/awarded sequence later than originally scheduled, check your assignment for the next day. If it provides less than your contractual 12 hours rest, it is your responsibility to call Crew Scheduling.

“A Standby must be available for immediate contact and assignment while on Standby duty but is not required to be in the Standby room.”

Flight Attendants sitting Airport Standby do not have 15 minutes to call Crew Scheduling back  as we do on a RAP.  Not answering your phone, or immediately calling back, could lead to a missed trip.

Mark your calendars! Also, please bid accordingly to attend our next virtual PHX Base Town Hall. It will take place on Tuesday, September 21 at 11:00am (PHX time). Announcements with the link to join will be sent out to the membership 5-7 days prior to the Town Hall. Former PHX Base President Deborah Volpe will be a guest speaker. She will update the base on APFA’s communications plans during negotiations.

This bears repeating as it remains a hot topic…

If you are part of the working crew and you step off the airplane at any time while passengers are on the aircraft, including deadheading crew members and FSMs on QARs, for anything other than safety related duties, that is a violation of minimum crew. If this occurs, please fill out an ASAP Report within 24 hours of the incident. Should you be unsure if the reason you stepped off was considered “safety related” fill out an ASAP.  If you have any questions, please call us at 800-595-1471, extension 0.

Please do not hesitate to reach out if you have any questions or concerns.