The celebration of Pride occurs in June in honor of the 1969 Stonewall Uprising in Manhattan, a tipping point for the Gay Liberation Movement in America. On June 11, 1999, President Clinton issued Proclamation No. 7203 for Gay and Lesbian Pride Month. That same year, the U.S. Government added the Stonewall Inn and the neighboring park and streets to the National Register of Historic Places. On June 1, 2009, President Obama issued Proclamation No. 8387 for Lesbian, Gay, Bisexual, and Transgender Pride Month.

A Profile in Courage: Karine Jean-Pierre 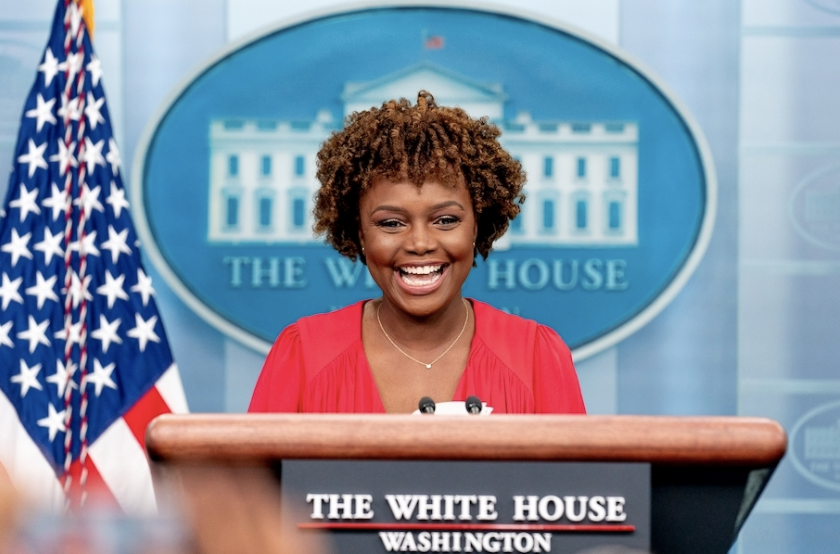 On May 5, 2022, President Joe Biden named Karine Jean-Pierre as the next White House press secretary. She became the first Black woman and the first openly LGBTQI+ person to hold the top position.

Jean-Pierre was born in Fort-de-France on the Caribbean island of Martinique. As a five-year-old, she and her family later immigrated to Queens, New York, where she spent much of her childhood.

Before joining the White House, Jean-Pierre worked in New York City politics, served in the Obama administration, and was a spokesperson for MoveOn.org, an advocacy group, and political action committee. She also was an MSNBC political analyst. Jean-Pierre and her partner live in Washington, D.C. with their 7-year-old daughter.

Jean-Pierre led her first White House briefing in May of 2021, making history as the first openly gay woman and just the second Black woman to do so. “I appreciate the historic nature. I really do,” Jean-Pierre said at the time. “But I believe that being behind this podium, being in this room, being in this building isn’t about one person. It’s about what we do on behalf of the American people. Clearly, the president believes representation matters, and I appreciate him giving me this opportunity.”

The Progressive Pride Flag: Recognizing the Evolution of Diversity and Inclusion Within the LGBTQI+ Community

Since the early 1970s, the six-color rainbow Pride flag has recognized and represented the Queer community. As communities evolved, questions arose as to whether the six-color rainbow flag is sufficiently inclusive of those that have made some of the boldest and significant contributions to the movement for equality, specifically people of color and our trans community.

In 2018, Portland-based designer Dan Quasar set out to modify the iconic flag to integrate and recognize more broadly the varied histories that make up the LGBTQI+ community. The newly-included colors within the arrow leading towards the right represent the forward movement within the community and the need for further progress towards full inclusivity. By including black and brown stripes to represent marginalized LGBTQI+ communities of color, as well as the pink, light blue, and white colors of the Transgender Pride Flag, we are placing a greater emphasis on those who have long been excluded from the narrative.

This month and throughout the year, we stand shoulder to shoulder with our LGBTQI+ co-workers as the fight for equality continues.