The arbitrator’s decision in the 48-Hour Presidential Grievance is in and it is disappointing. In short, the arbitrator accepted the Company’s argument that the 48-hour freeze times stated in the contract were “placeholders” and not affirmatively agreed upon contractual provisions. This means the Company will proceed to implement the new provisions with the 120-hour freeze period while the PBS bids are processed and loaded into FOS.

The arbitrator also heard APFA’s arguments that freezing any trip that touches the last six days of the month for 120 hours would create an undue hardship on our members. Accordingly, the arbitrator has ordered the Company to reduce the number of days from the last six (6) days down to the last three (3) days. If, however, the Company can reduce the processing/loading time from 120 hours to 96 hours, the Company may increase the frozen days at the end of the month to four (4).

JCBA Bidding Timeline as Modified by the
February 28, 2018 Letter of Agreement: 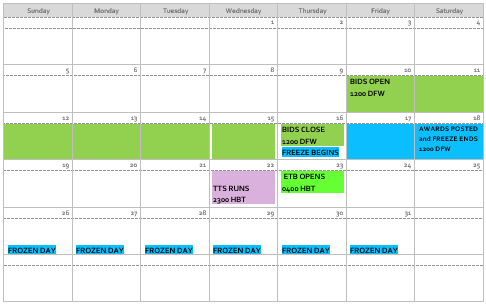 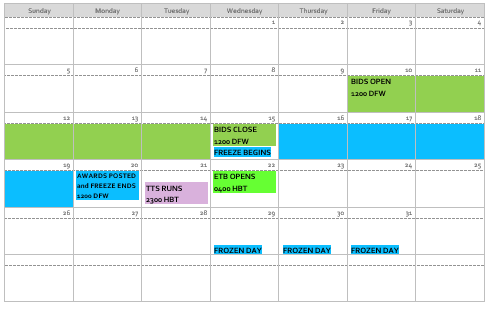 As a result of the changes made by the arbitrator, it is now possible that PBS will award a trip in the new month which creates a legality conflict with a trip in the current month. This is a situation not contemplated by the JCBA because the driving force behind PBS is to eliminate schedule conflicts. So there now has to be a means to resolve these potential conflicts. The arbitrator has determined that the mechanism to resolve schedule conflicts should be the mechanism contained in the Legacy American Airlines contract (Foundation Document, Article 9.I.). However, that mechanism may be modified based on recommendation of the JSIC. Any recommended modification must be approved by both the Company and APFA.

How did the arbitrator arrive at this decision?

It is important to remember that there were two grievances involved in this arbitration: the APFA Presidential Grievance and the management grievance filed against APFA. The arbitrator agreed to combine both grievances into this arbitration due to the nature of the grievances and the need for expediency. For those same reasons, APFA and the Company agreed to let the arbitrator serve as an “interest arbitrator” on the limited, specific issues. This afforded the arbitrator the authority to craft a remedy or resolution to this particular situation without setting a precedent for any future disputes which may arise.

It is unfortunate the Company was unable to secure a PBS vendor that could provide, within FOS, the expedient processing times outlined in the current Redbook version of PBS. Nonetheless, APFA and the Company must abide by the ruling. The arbitrator has retained jurisdiction over the matter, so if any issues arise, they can be referred back to her without going through the entire grievance process again. APFA will remain ready to challenge and demand full remedy for any future IT failures.