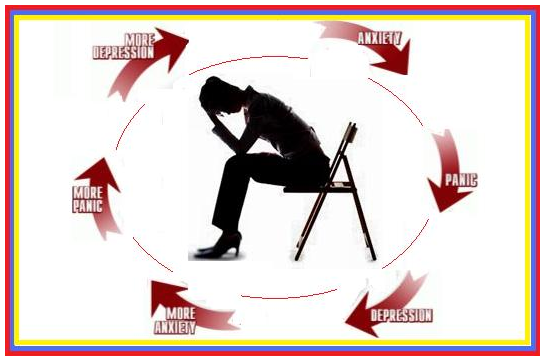 Feeling down or having the blues now and then is normal.  Everyone feels anxious from time to time- it’s a normal response to stressful situations.  But severe or ongoing feelings of depression and anxiety can be a sign of an underlying mental health disorder.  Depression and anxiety are different conditions, but they commonly occur together.  They also have similar treatments.  The best way to understand the difference between the two disorders is with the primary symptoms, starting with the mental symptoms.

Those with anxiety often find themselves feeling like something bad might happen and they’re worried it will. Those with depression often assume a bad future and don’t expect anything else or think there’s anything worth preventing.

Depression can occur after someone experiences anxiety, because someone that deals with severe anxiety may end up feeling drained and hopeless once their anxiety or anxiety attack is over. That’s why the two conditions can be difficult to tell apart. Similarly, those with depression can still fear certain things getting worse, despite already being of the belief that the future is less positive or bright. Physical symptoms can be very different as well. Though again, there are similarities. Both anxiety and depression can leave you feeling drained and fatigued. But in the case of anxiety, it tends to occur after intense anxiety, while with depression it tends to be more constant, without necessarily any triggers. Other physical symptoms include:

Depression actually tends to have fewer physical symptoms, but the mental symptoms can be so dangerous (especially the potential for suicidal thoughts) and the lack of energy so pronounced that many people with depression deal with intense struggles daily that certainly rival the symptoms of anxiety.

Symptoms of both conditions usually improve with psychological counseling, medications, such as antidepressants, or both. Lifestyle changes, such as improving sleep habits, increasing social support, using stress-reduction techniques or getting regular exercise, also may help. If you have either condition, avoid alcohol, drugs, and smoking. They can make both conditions worse and interfere with treatment.

If you or someone you know has five or more of these symptoms for two weeks or more, it could be caused by depression or anxiety.

Confidential help is available by calling your APFA EAP Department at (817) 540-0108 extension 8701 and a National EAP rep will return your call. You may also email us at eap@apfa.org

Employees also have the option to meet with a counselor for up to four in-person counseling sessions free of charge.

Counselors provide confidential support and are there to assist you with information, resources, referrals, and a list of therapists in your area. Inform them you are an American Airlines Flight Attendant that would like to take advantage of the four free counseling sessions.