APFA and the Company have agreed to a Misaward Process providing pay protections for Flight Attendants misawarded in TTS, UBL, ETB, ROTA, and ROTD. The Misaward Document is posted on Crew Change under Pay Protections and Rescheduling. A link is also available on Jetnet > Flight Service > Bidding – PBS > Links > Misawards.

Below are some key points to remember:

If you believe you have been misawarded in one of the Scheduling Systems, you must submit a Direct Connect within 96 hours of the misawarded run. Claims submitted outside the 96 hours will not be considered.

Bid for all ‘like’ sequences on the original days of the misawarded sequence:

TTS Misawards: Participate in three (3) TTS runs, bidding for all like sequences on the calendar days of the misawarded sequence*

UBL Misawards: Bid for all like sequences in UBL until 1500 the day prior to the last duty period*

ETB Misawards for Reserves: Bid for all like sequences in ROTA*

Reserves Misawarded on Reserve Days: Must remain available for an assignment on the days of the misawarded sequence

*A sequence picked up in ETB that touches a pay protected calendar day will negate pay protection.

Why is there a difference between the credit showing in TTS/UBL/ETB and the credit once the sequence is awarded?

An update to reflect the actual value of the sequence is currently in testing and is planned for implementation in June.

Why was I awarded Standby from my standing bids instead of the RAP bid from my future bid?

ROTA applies the following rules, in order, when awarding/assigning RAPs:

Utilizing this waiver applies to all RAP preferences. Unless you have a legality from a previous assignment, you will be considered legal for all RAPs and awarded/assigned in Step 4.

FA 1 waived 11-hours between RAPs, and shows as legal for RAP A. After assigning RAPs based on rest requirements from previous RAP, open slots are awarded in seniority order, based on the FA’s preferences. FA 1, the most senior Reserve, has RAP B as his first choice, but after applying rest requirements between RAPs, no open slots remained in RAP B. FA 1 is awarded his second choice, RAP A. 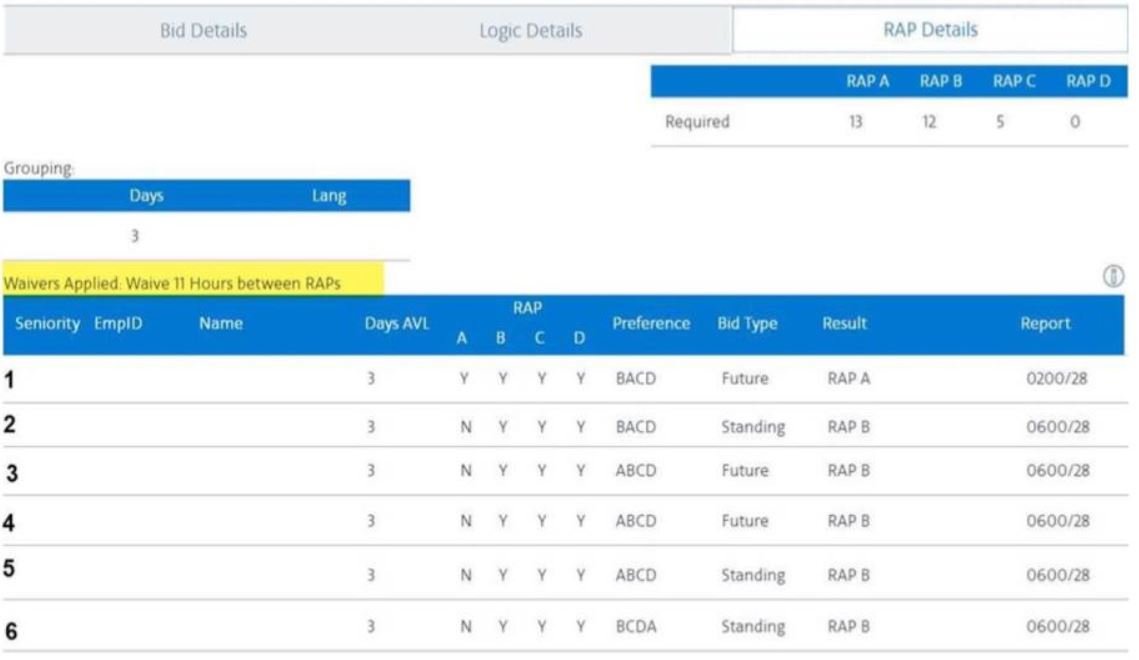 Why did I receive the response “Validations Failed” on my ETB transaction? 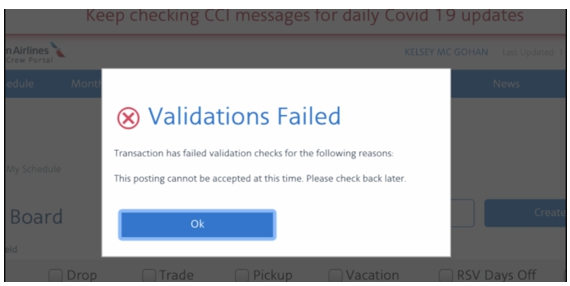 The message above states the posting could not be accepted at this time. This happens when the sequence has been modified in FOS after posting on the ETB. The information is compared and updated every 20 minutes, so the message advises to check back later.

With the increased cancellations and repairs of sequences, this is happening more frequently. Call Crew Scheduling immediately for assistance with any ‘Validations Failed’ messages.