This week on the staffing and allocations calls, APFA National and Base Leadership addressed the high reserve percentages and high line averages and asked for answers on why we see such a sharp increase in reserve numbers which inflates the line average. Despite APFA’s detailed input for fixes, including transitioning more reserves to line holders to bring down the high line averages, they would not agree to changes, claiming continued elevated absenteeism while ignoring other factors contributing to the need for more reserves.

APFA pushed back, and stated that the company is creating many issues resulting in more open time, which requires more reserves. Absenteeism is not the sole reason for increased open time. Among other issues, the company has decreased our flexibility in TTS for many months. This all contributes to Flight Attendants being locked into their schedules, with limited ability to adjust monthly lines.

APFA President Julie Hedrick and your Base Presidents came prepared to the calls with data from 2019 to show that reserves were not reaching their guarantee, but management would not make the suggested adjustments. APFA also pointed out that inhumane trip construction fuels absenteeism and the need to break apart trips built to their maximum legalities, causing the company to blow through reserve Flight Attendants on a normal day, not just in irregular operations. American feels Flight Attendant staffing is sufficient for June 2022.

As we communicated earlier this week, the company has advised APFA that they intend to flex the June line value by two (2) hours per JCBA 10.D.13.d.This flex allows manpower planning to build lines of flying between 72 and 92 hours instead of the non-flex parameters of 70 to 90 hours. With the high target line averages in every base, raising the maximum to 92 hours gives PBS more flexibility as it processes to provide the most optimal solution and increase satisfaction. This flex is not an issue with PBS- the problem is that too many Flight Attendants are being placed on reserve, causing PBS to have fewer line holders than needed to spread out flying time and offer the best solution for all.

What is a flex month?

JCBA 10.D.13.d allows the Company to increase the maximum line value in PBS up to five (5) hours during any given month and no more than an annual amount of twenty-five (25) hours. 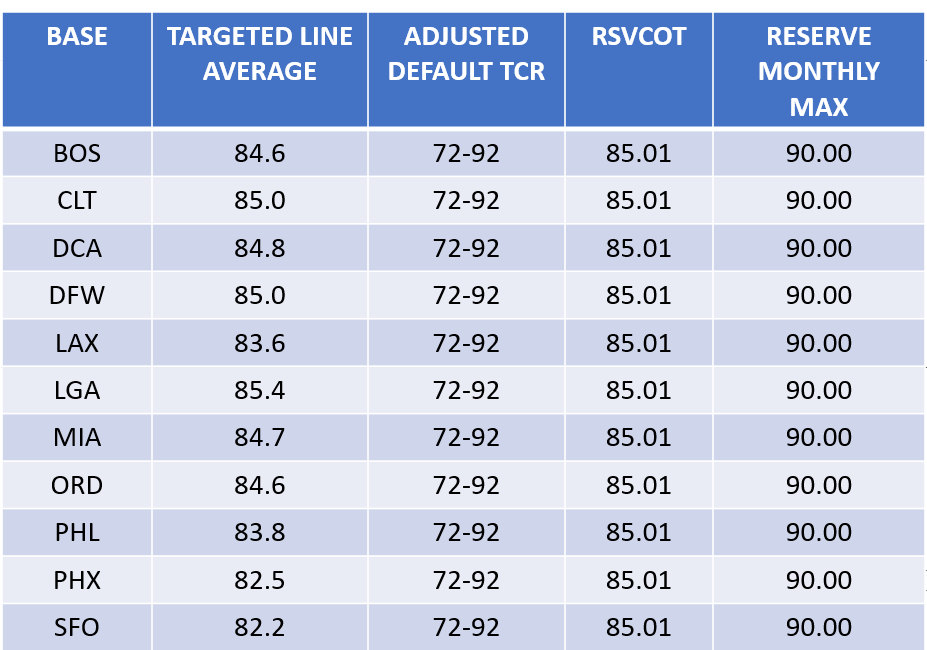 Do I need to change my lineholder bidding strategy in PBS to account for the two-hour flex for June?

If you typically like to bid a low line of time, be aware that with a higher line average and June being a flex month, what constitutes a low time award will also go up by two hours. This means a low line will be between 40 and 72 hours. We will likely see minimum line constraints at all or most bases and you may be forced to 72 hours or more depending on the final line average as well as the bidding behavior at your base. Please bid accordingly. We suggest you expand your TCR in later layers to account for being held to a line of at least 72 hours.

If you typically bid high time in PBS, be aware that for June a high time award is more than 92 hours up to a maximum of 110 hours. We suggest you adjust your TCR upward to accommodate the two-hour flex for the month. 110 hours is still the maximum number of hours you may be awarded.

If you typically don’t bid using the TCR property and let the system default to 70-90 hours for your award, because of the flex the default for June will be 72-92 hours. If you are satisfied with a default of 72-92 hours, you don’t need to change anything for your bid.

PBS Bidding for Reserves during a flex month:

A flex month will not impact how PBS awards reserve days off. If you are bidding as a Reserve, you should bid your days off as you normally do on the Reserve Tab in PBS.

Increasing reserve numbers and line averages are not the answer. Better sequence construction and smarter reserve utilization will result in fewer Flight Attendants on reserve. Reserve numbers have been an issue for years, and pounding our chests to the company has proved fruitless. This is why your APFA Leadership, from National to Base, are collecting data and backing up our words with numbers. That is the only way we will find relief.